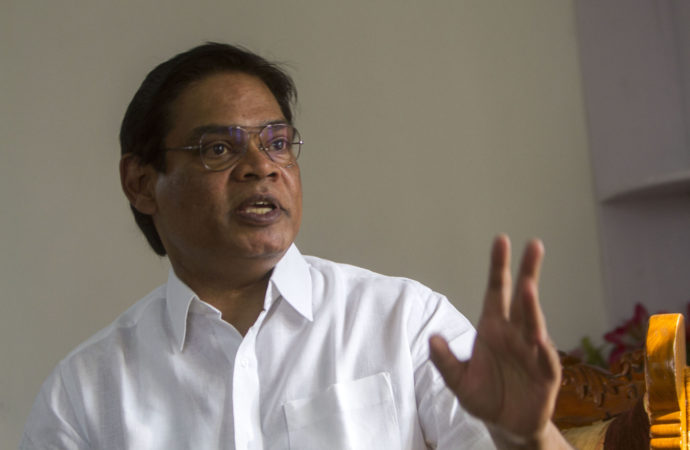 David Devadas discusses with Gunjan Joshi the uprisings of 2010 and 2016, causes behind these, and his new book ‘The Generation of Rage’ in Kashmir.

Q. What is your opinion about uprisings of 2010 and 2016 as an author and a geopolitical analyst?

Srinagar city was the focal point of uprising in 2010, whereas it began radiating from rural areas in 2016. The second uprising also covered places which were not a part of agitations during 90s. The stone pelters of 2010 were adolescent children ranging from late teens to early twenties; while individuals in their late twenties or thirties were a part of agitations. Consequently, the demonstrators of 2016 did not participate in protest after first two days. The young boys that manned the barricades and pelted stones in 2010 branded themselves as millennial protestors.

Most significantly, 2010’s uprising protested the killing of innocents which were not a part of militancy. They were seen as an alarming cry against the lawmakers of Kashmir. In 2016, teenagers protested the killing of a militant Burhan Wani who was once one amongst them. Between 2010 to 2016, the protestors had lost all hopes from the system.  They openly supported militants and they still continue to do so. This was witnessed when young villagers were pelting stones during the operations of security forces. Several adults may not have similar attitude but their opinion barely matter now. I have tried to analyse the causes and differences in these two uprisings in my book ‘The Generation of Rage in Kashmir’.

Q. Has these spirals of violence the ethos of Kashmiriyat that once comprised of benevolent mystics and rulers like Nund Rishi, Lal Ded, and Zainul Abidin?

One of chapters in the book describes the radicalization of pre-teens and teenagers during last ten years.  The syncretistic ziarat-oriented sufi culture that formed the Kashmiri identity is retreating now. During past years, Salafist Ahle-Hadith movement and the Tablighi Jamaat have grown exponentially whereas the Jamaat-e-Islami movement have decreased since 2014. The book has provided various reasons for it. Earlier in my book, `In Search of a Future, the Story of Kashmir,’ I had described the equivalence in love and hatred among different identity groups in Kashmir. These identities were shaped by different factors such as religion, ethnicity, and sect which have evolved over some periods of history. However, the term ‘Kashmiriyat’ requires a finer and nuanced understanding.

Q. Being a microcosm of secularism, Kashmir is the land from where Mahayana Buddhism  spread to further north and Naqsbandi order of Sufism thrived. What are your thoughts about it ?

Apart from the Naqshbandi order, the Suhrawardi and Qadri orders of Sufis also began and thrived on this land. Few saints like Syed Mir Ali and several rishis are deeply revered in rural areas. The austere living and love for nature of these rishis were parallel to ideas of Chisti sufis from plains. A majority of Kashmiris were buddhist, shaivite, and muslims in various periods of history in Kashmir. The region has also been a hub of civilization for several years since it had very good trading relations with farthest ends of south Asia and Central Asia. But, past few years have seen growth of fundamentalist ideas about identity, religion, and culture. For instance, radical ideas of Zakir Musa are popular even if he didn’t control a significant militant group.

Q. What does the term ‘new millitancy’ that has been used in your book frequently means?

It refers to the militancy that started in 1998 and was on the verge of culmination from 2006 to 2007. Pakistani militants took over this movement from foreign outfits like Lashkar and Harkat that later on became Jaish. Kashmiris became supporters of governance after 1997.

In my book `The Generation of Rage in Kashmir’, I have stated that a new militancy came into existence after 2009. The pattern, reasons, and aim behind it were very different from militancy of past. This militancy has been shaped by narratives about the previous militancy. It also supported the narratives such as global situation of Muslims, and spoke about occupation, colonization, genocide etc through a concerted discourse.

Q. What do think about slaughter of young Kashmiris that became a part of security forces?

These killings show a very terrible trend in society. In my book, I have told that during Mr. Vajpayee’s reign peace talks were initiated because of which a lot of young individuals in Kashmir started taking pride in their Indian identity. This happened for the first time during Indian independence. The noteworthy aspect of this development was that this youth had witnessed the wrath of 90s as children. In 2010, Pakistan took control of the situation during halfway of the protests and it took control of the protests firmly by 2016.

This simply means that rage among youth is channelized and then capitalized by foreign bodies. The main aim of these bodies decrease pro-India sentiments in Kashmir. To execute this strategy, individuals from security forces such as policemen, soldiers and officers from Kashmir, and workers from mainstream political parties are targeted. By these steps, they want to degrade the morale of forces and discourage them from joining forces by threatening their families. This multi-pronged effort had increased since 2015.

Q. A survey of 6,000 students have been included in your book. What do you think is the reason behind rage?

Before militancy made the violence a vicious circle, the presence of mammoth counter-insurgency forces was one of the primary reason. Nepotism, corruption, and governance failure are few more reasons behind this rage. If the apparatus of counter-insurgency forces was reduced till 2006-07, the ‘new militancy’ would not have taken birth at all. The survey was conducted among individuals of several location gender and social milieu. The understanding of Azadi differs for every section of society. For instance, young boys relate it to the availability of civil rights; while for women it represented the intimidating presence of security forces. The survey also found that an average Kashmiri youth only have vague ideas about several identity groups and had little or scarce knowledge about religion.

Q. How should have government acted differently in past ten years to break the stalemate of ‘new militancy’?

The security force apparatus of counter-insurgency should have been discontinued ten years ago. It should have replaced by systematic and answerable government. Afterwards, every step should have been taken to curb the killings of onlookers and to reduce collateral damage. The security forces must practice extreme restrain during operations. During first few months of governor’s rule, stone pelting had reduced. The ‘futility of militant deaths’ is the new debate among youth of south Kashmir.

Q. What do you think about abrogation of article 370 and 35A?

The key component of both these articles is domiciliary rights and these should be placed in state laws rather than being a part of constitution. But, the constitutional provisions have a strong legal hold on consciousness of people. Hence, the right time to fiddle with them has not yet arrived. It would alienate people more and might result in a greater uprising than the killing of Burhan Wani.