Discover Zen in a Patch of Forest 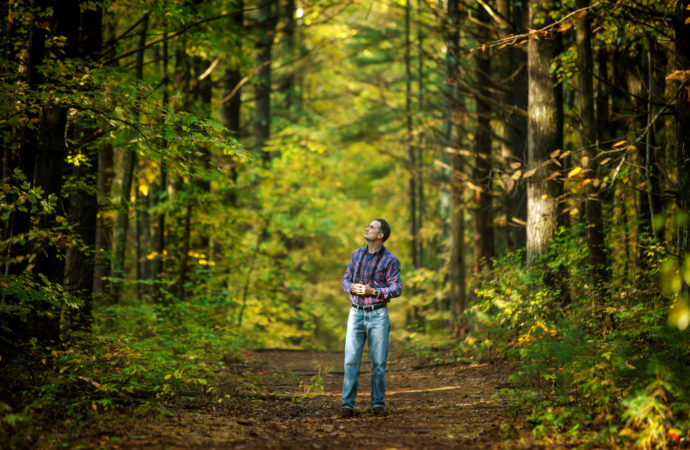 Dr. David George Haskell, the author of ‘The Forest Unseen’ and an ecologist at University of South, journals his painstakingly minute observations in this book.

Book Review:  The Forest Unseen (A Year’s Watch in Nature)

Mandalas, as I have understood from the book are delicate structures of sand, which are used as an aide by Buddhist monks to meditate. These structures act as vessels for these monks in which they pour their cleansed focus. Most of the botanists, ecologists, artists, particle physicists, zoologists, and poets have utilised the idea of journaling the painstakingly minute observations for their creations. Therefore, a lot of authors before David George Haskell have written books such as ‘Pilgrim at Tinker Creek’, ‘The Voyage of the Beagle’, ‘Braiding Sweetgrass’ etc which were based on observations about a pond, a patch of coniferous land, or just a brook.

Dr. David George Haskell, the author of this book and an ecologist at University of South records his observations about one-square-meter patch of forest in Sewanee, Tennessee for a year. He refers this patch of forest as a Mandala numerous times in the book and thereby describes his monthly observations in it. He sifts the loam, wades through the leaf litter, observes the heads of crustaceans and rocks through a hand lens, and derives his theories from it.

The whole prose of this book highlights the author’s accute insight of ecology, his innate inclination towards aesthetics, and his zen inference behind every natural phenomenon in the Mandala.  As he describes natural partnerships between fungus, lichen and bacteria; working of xylem and phloem; life cycle of ephemerals, salamanders, and mosquitoes; and dispersal of seeds, he also brings out lesser known work of Johannes Kepler about the size of snowflakes and nomenclature of plants according to their utility in the ‘Doctrine of Signatures’.

Haskell being a biologist does not distill his observations from any kind of scientific research. He doesn’t conduct any empirical research while he observes Mandala twice or thrice in a month. Instead, he just watches the growth of a flower or a movement of creature mindfully like a Tao monk. The book seems to be inspired by work of an evolutionary biologist, William Hamilton and his wife Sarah Vance. The former is an author of other celebrated books namely ‘The Selfish Genes’ and ‘Sociobiology’ whereas his wife is an eminent naturalist who has an emphatic eye for nature and with whom he lives in a micro-farm.

The first chapter of this book begins with a frosty day of January at the Mandala. This chapter was a bliss to read, as Haskell adroitly explains the intricate union of a fungus, bacteria, and an alga to constitute lichen. He explains in this chapter the reason behind longevity of lichens. This union involves losing of cell-wall by the algal partner, merging of its cell-organelles with fungi, and refraining from sexual activities for an increased self-cloning. The intricacy of this relationship is further enhanced as it becomes hard to draw a line between the oppressor and the oppressed.

As we read further, we come across other strange inter-dependencies that has led to evolution of specialised cell organelles from prokaryotic bacteria. Here, I discovered that cell organelles like mitochondria and chloroplasts still possess their genetic material because these are descendants of some bacteria that existed half a billion years ago. These tenants bartered their cell-wall, freedom, and sexual activities for an evolutionary advanced relationship.

The comprehensive literature research by the author is evident by a lengthy chapter-wise bibliography which consists of several renowned publications in the field of zoology, ecology, botany, taxonomy, economic botany, and eugenics.  This is similar to his in-depth observations at the Mandala. But, lyricism in the prose while he elaborates the cooperation and conflict in the relationships mentioned above made me wish that I was his student at the University of South.

“Although our genes function as one unit, they come with two or more subtly different writing styles, vestiges of the different species that united billions of years ago. The ‘tree’ of life is a poor metaphor. The deepest parts of our genealogies resemble networks or deltas, with much interweaving and cross-flow”, confesses Haskell.

Seasons evolve from frosty winters to fecund spring. The author too through the seamless prose explains the modes of adaptation by plants to survive the winter chill, dispersal of seeds by herbivorous mammals, complexity of interdependence in a rumen ecosystem, and the reason behind profuse proliferation of spring ephemerals. Thereafter, he utilises principles of evolution to explain reasons that helped angiosperms to survive the wrath of ice-age. According to him, insects such as ants helped them to flourish rapidly by planting their seeds nearby and deer helped in dispersing their seeds to longer distances. “Evolution commands not just multiply, but go forth and multiply”, writes the author.

The pace of life increases as the spring is succeeded by early summer. The author then skillfully explains the functioning of xylem that serve as an indispensable connection between water in soil, trunk, and sunlight. As stomata, the tiny breathing pores on leaves give way to evaporation, surface tension of remaining water present in the narrow gaps between the cells on the surface of the leaves increases. The pull is then transferred to veins of the leaves, further to water-conducting cells present in the trunk of trees, and then eventually to roots. This elaborate explanation of moving gallons of water silently through the trunk of a tree is another best part of this book.

Haskell’s sharpness of observations becomes more visible when as he clarifies how herbivorous caterpillers utilise the sugar-rich phloem sap and proliferate. Though Mandala contains abundant insects to eat every part of plant such as flowers, leaves, and pollens but population of plants is least affected by enormity in the quantity of these herbivores due to their toxic biochemistry. “The biochemical swordplay between plants and their herbivores has created a tense stalemate in the Mandala. Neither side has yet routed the other”, he adds.

In another erudite prose, the author goes into detail about the inter-relatedness of each organism with the other. For example, female Culex when feeds on author’s blood gets a proteinaceous boost. His blood will hence end up in the eggs of the mosquito and then to the body of aquatic larvae. In the same way, when a bird swallows a snail’s shell, it dissolves in the bloodstream of the bird. Further, it constitutes the shell of a bird’s egg. He thereafter clarifies complexities in reproductive activities of wasps by using principles of history and biology.  When they lay their eggs in caterpillars, the larvae eat their hosts from inside out after hatching. He refers this to this as ‘problem of evil’ which leads him to skeptical agnosticism.

The author appears like a Zen monk more than a hypothesis-driven scientist towards the end of this book.  He feels contented as he witnesses four gray squirrels playing together. In this moment, he finds true joy which he rarely found in his academic papers about ecology and animals. He then states that science can fortify our relationship with nature only when it is practiced properly. He argues, “But there is a danger in an exclusively scientific way of thinking. The forest is turned into a diagram; animals become mere mechanisms; nature’s working becomes clever graphs.”

When Haskell leaves the Mandala, he develops heightened awareness about his ignorance. The book not only explains the vastness of parallel world running with us but also teaches us about triviality of our species in this world. Humans according to him have the least role to play if the world was a Mandala. “Life transcends us. It directs our gaze outward”, he concludes like a Zen monk.