To Err is Machine, While to Code is Human 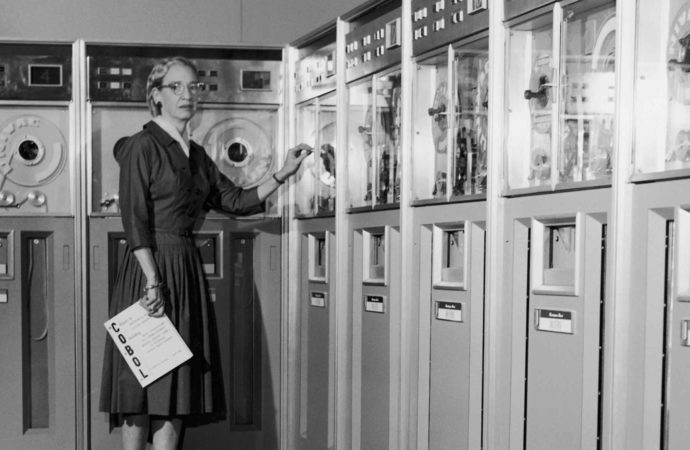 “UNIX is basically a simple operating system, but you have to be a genius to understand the simplicity.” – Dennis Ritchie

1. Born as daughter to English poet Lord George Gordon Byron and Lady Anne Isabella Milbanke Byron, a little girl was taught rigorous principles of mathematics and science from the age of four since her mother wished to refrain her from derelict romantic moods and behaviour of her father. At the age of 17, she met an inventor and mathematician who demonstrated to her the prototype of her prospective analytical engine. The Note G of her paper written in an English journal in 1843 told how a machine could be programmed with a code to calculate Bernoulli numbers which some consider as the first program ever. Who is this girl and her renowned mentor?

2. During WWII, a Rear Admiral in United States Navy and one of the lead programmers Dr. Grace Murry Hopper helped in developing a programming language that was machine independent. This language is still in use. She and her associates came across a hurdle on September 9, 1947 which was stuck in the relay of Mark II computer. Neither she nor her crew used a particular ‘word’ to describe it. This hurdle became legendary afterwards when programmers across the world began using a ‘word’ for any hurdle of this kind. Which is this language and what ‘word’ is this?

3. Hewlett Packard, Google, Apple and Google run operations across the world and have profit more than multi-billion dollars. All of them share one identical aspect in the story of their origin. What is that humble aspect that was common in origin stories of these mega companies?

4. Nikola Tesla toyed with this idea in early 1900s and its first prototype came in late 1960s with the creation of ARPANET. This idea evolved further in 1970s after scientists Vinton Cerf and Robert Kahn developed Transmission Control Protocol and Internet Protocol, or TCP/IP. After getting support from Department of Defense, ARPANET adopted TCP/IP on January 1, 1983. The researchers then began to nurture this ‘network of networks’ further. What is this idea?

5. Dennis Ritchie was a son of Alistair Ritchie, a scientist at Bell Labs and co-author of The Design of Switching Circuits. He along with Ken Thompson worked on Multics, a primitive time-sharing operating system. While they were developing this operating system, one of their friend Brian Kernighan suggested a witty name which was a pun on multics. They developed this system using a language called B. Which language this primary language evolved into and which operating system is this?

6. The first prototype of a new device was presented by engineers of this organisation to their boss. He rejected it stating that it was too big. When engineers insisted that the device was as small as it could get, he threw the device in water. Bubbles came out of it and he inferred through this there was still space in it. Thickness of the first version of this device was 19.8 mm. Its most recent version is just 6.1 mm thin. Who was this boss and what is the name of this device?

7. Few years after the invention of TCP/IP in March 1989, a person affectionately known as TimBL suggested that a pool of information could be provided on a platform where the information could be enriched and evolved. According to him, this platform should be a limitless web of notes with links. Who was this and what was his creation?

8. Introduced in 1985, this operating system was path breaking. It was named because of computing boxes that formed the fundamental aspect of it. Designed for Intel 286 processor, it allowed users to point and click the boxes instead of typing DOS commands. Its upgraded version is most widely used OS for desktops and laptops across the world till date. Which OS is this and what was its version?