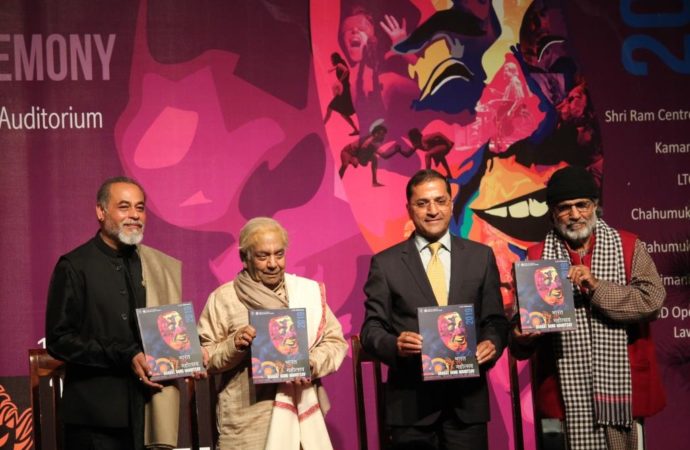 After 21 days of staging plays from states all across India successfully, the 20th Bharat Rang Mahotsav which is the international theatre festival of India ended yesterday. The 21 days’ theatre fest is organised every year by National School of Drama and this year too ended with a colorful culmination.

The closing ceremony was held yesterday at Kamani auditorium. Kathak maestro Padma Vibhushan Pt. Birju Maharaj graced the evening as the chief guest and Shri Arun Goel, Secretary, Ministry of Culture was present as the Guest of Honour. The ceremony was presided over by Dr. Arjun Deo Charan, Acting Chairman, NSD Society. The guests at the ceremony were welcomed by Shri Suresh Sharma, Director In-Charge, National School of Drama. A book containing the collection of plays staged during 20th BRM was released during the ceremony. Shri Abdul Latif Khatana, Associate Professor, Acting and Chief, Sanskaar Rang Toli expressed a token of thanks to conclude address for the evening.

The ceremony concluded by staging of the play ‘Dhumrapan’. The play was presented by the group D for Drama from Mumbai and was directed by Shri Akarsh Khurana. A satire on stressful corporate life, the play portrayed how the quest for professional growth takes a toll on human values and sets a trend of being indifferent towards wrong doings.  Speaking about the interrelatedness of arts, Padma Vibhushan Pt. Birju Maharajsaid, “It is important that we spread love and happiness. Much like the art, we need people who appreciate art. I have a very close relationship with National School of Drama and I have been a part of several plays being staged at NSD due to its close proximity with Sangeet Natak Akademi.”

Shri Arun Goel, Secretary, Ministry of Culture added to this, “I compliment NSD for this very successful organization of this festival in Delhi and 5 other cities. Theatre has a great potential to contribute to the GDP and create employment opportunities, especially for the youth. The Ministry is ready to provide platforms for discussions on addressing the economic plight of theatre artists.”