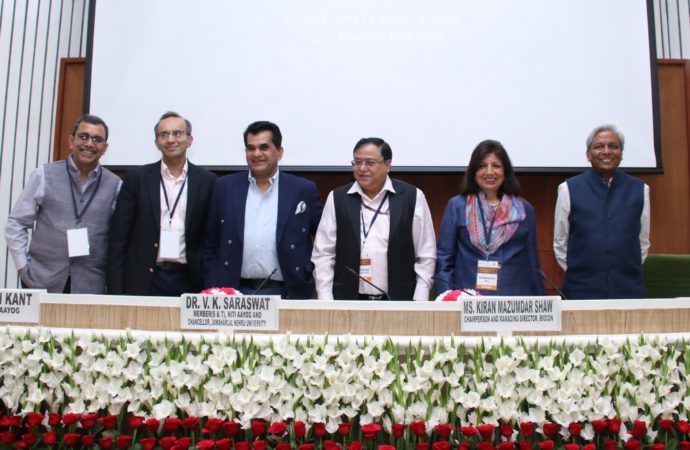 LMSAI, NITI Aayog and the office of Principal Scientific Advisor to the Government of India conducted the Annual Science Symposium at Vigyan Bhawan on Thursday.

Focusing on the role of academia and governing bodies to encourage the intersection between industry, innovation, and requirements of community at large, the Lakshmi Mittal and Family South Asia Institute (LMSAI) at Harvard University with NITI Aayog and the office of Principal Scientific Advisor to the Government of India conducted the Annual Science Symposium – Science and Society on Thursday at Vigyan Bhawan.

Science and society are interdependent on each other and neither of them can flourish without each other’s intervention. The event emphasised the intervention of science for the development of society and nation as a whole. The symposium was graced by scientists from leading academic institutions of US and India. They identified three strategic objectives to bolster the intellectual ties that binds scientists of various nations with each other.

Mr Lakshmi Mittal, Chairman and CEO of ArcelorMittal and a supporter of LMSAI said, “My family has always believed in supporting higher learning and its actionable outcomes for business and society. We are very proud of this inaugural event of The Lakshmi Mittal and Family South Asia Institute at Harvard University, which demonstrates our continuing commitment to these goals. In particular, I would like to see more young people actively pursuing education and careers in STEM subjects.”

During six sessions, the symposium hosted industry veterans which brainstormed on several issues related to national development. One of the sessions talked about implementing technological advancements in agriculture, telling villagers how to increase crop productivity, and ensuring food security for an agrarian country like us. The theme for the next session was ‘Catalysing India’s Digital Health Ecosystem’ in which Mr. J Satyanarayana, Chairman, Unique Identification Authority spoke about the importance of Artificial Intelligence and Big Data.