Into the Realm of Exotic Sculptures! 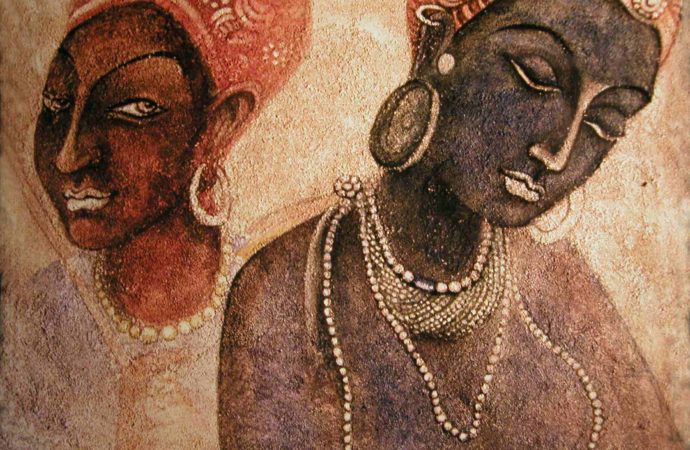 Reciting the spiritual facets from routine of men and women, murals at Ajanta and Ellora present an entire pageant of life events from three religious cults.

It was 1819. A group of British soldiers along with their native luggage carriers, trudged sluggishly to pursue their game, a tiger in a hot tropical jungle located approximately 60 miles away from Aurangabad. The group was led by Captain John Smith, a young cavalry officer from Madras. Serendipitously, they came across a gigantic assemblage of hidden caves that had sculptures related to an ancient civilization. It was witness to a great kingdom that had mastery over painting and stone-carving during the days when England was not conquered by Roman Empire. Located in the sylvan Sahyadri range of Western Ghats, the exact dates of these caves remain elusive. The paleographic evidence state that these can be dated from second century BC to first century AD.

Five of the caves were temples; the rest of them were Buddhist monasteries where approximately 200 monks and artisans lived. Enthused by the stories about the carvings and paintings at Ajanta and Ellora caves, I decided to visit this world heritage site. Situated 388 km from Mumbai and 104 km from Aurangabad, Ajanta caves lay in anonymity for almost 1000 years before Captain John Smith discovered these in 1819. The giant rock of 250 feet makes them an ideal site for a Buddhist monastery. Apart from their spectacular architecture and sculpture, these caves are also known for their paintings. The caves are numbered in consecutive order and not in their chronological order.

Out of the 30 caves in Ajanta, 16 caves contain mural paintings. The best paintings can be witnessed in caves numbered 19, 17, 16, 1, and 2, whereas best sculptures can be found in 26, 24, 17, 4, and 1. The painters of these paintings have used ingenious techniques for their art. Clay, cow dung, and rice husk first formed the foundation of these murals. A layer of lime was then coated on this foundation after which designs were drawn using brush in which colors were filled in. The pigments too spoke of ingenuity since these involved the use of red ochre, yellow earth, lamp black, powdered green rock, and copper oxide. The bounty of colors used in figurative paintings remain unscathed by time and leaves the spectator contemplating about the mastery of artists.

Most of the murals at Ajanta caves, date 600 years later after their first phase of construction. These were prepared during the reign of Gupta dynasty in fifth century. This period is known for finest sculptures made by the Gupta dynasty in their capital city Kannauj. It was also the time when Kalidasa was writing his renowned play, Meghaduta or The Cloud-Messenger. The two categories namely occurrences in life of Buddha and illustrations of Jataka tales form the central theme of wall paintings in these caves. One can see handsome nobles and princesses with floral tiaras courting on couches and swings, while petite dancing girls with exuberant sensuousness perform near lotus pond.

Reciting the spiritual facets from routine life of men and women, these murals present an entire pageant of contemporary life events unfolding a variety of emotions. The paintings of ceiling primarily comprise of ornamental and floral motifs, heavenly creature in flight, plants, birds and animals. Cave 1 contains a masterpiece called Padampani. With half-closed eyes of Bodhisattva immersed in deep meditation and features exuding tranquil mindfulness, this painting has fascinated artists across the world. The Apsara of cave 17 and Maya in cave 2 depict the opulence in attire of the royal women. A consultation with a guide who is well-versed with the Buddhist philosophy could leave you most enlightened.

Located at approximately 28 km from Aurangabad, the Ellora caves depict a blend of three religious cults – Brahmanism, Jainism, and Buddhism. Each of these possesses a specific architectural style.  From the southern series, caves 1 to 12 depict Bodhisattva life which date from 500 to 700 AD. The caves after that contain tales of Brahmanism. Caves 30 to 34 represent various facets of Jainism. The most exemplary caves are 5, 15, 16, 29, and 32. The most remarkable mural for me was Kailasagiri orlord Shiva’s mountain abode in cave 16. Known as the greatest monolithic structure of the world, Ellora is an amalgamation of enormity of structure and subtlety in architecture. A rectangular trench was cut into the rock after the work started at a clifftop. An estimated three million cubic feet of rock was chiselled out afterwards. Sculptures then carved it over for decades drawing prolific ornamentation on the entire structure.

The entire sculpture is a gigantic double-storeyed structure. As I entered the monument, I shuddered at the enormity of the construction but other visitors felt humbled. Ellora caves prominently depict various forms of lord Shiva. While one of them is a mudra in Tandava dance where a furious, eight-armed lord Shiva is slaying a demon, the other mural depict him in his household while he is playing dice with goddess Parvati. The sculpture where Parvati is seen clinging to her husband is a magnificent work of art in its own sense. Among the Jain excavations from cave 30 to 34, Indra Sabha in cave 32 is memorable. The guides at Ellora were not acquainted much with the enigma called lord Shiva and hence we opted for half-hearted and ignorant guides. Apart from this experience, the trip to Ajanta and Ellora caves was enthralling and educative for me. I therefore decided that my first visit to these caves won’t be the last.