An Ancient Treatise for Contemporary Morals 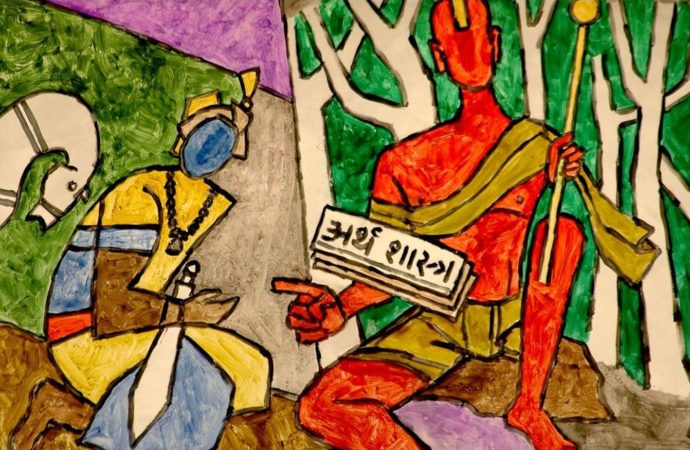 Chanakya Neeti with Chanakya Sutra is an abridged version of Chanakya Niti written by an Indian teacher, philosopher, strategist, economist, and royal advisor of Chandragupta Maurya. Known as Chanakya or Kautilya, he is known to have lived from 350-283 B.C.E. The Buddhist acknowledge his place of birth as Takshashila, while Jaina scriptures tell that he was born in Chanak village located in Gola district of southern India. He was a student of Takshashila university which was located in Peshawar of present Pakistan. He began teaching in the same university after the completion of his studies where he taught sons of renowned kings and aristocrats such as Bhadrabhatta and Purushdutta.

The facts about Chanakya’s birth and death are debatable but few facts about him such as his guidance to Chandragupta in entering the capital of Magadha kingdom by triggering a civil war, and uniting Indian states to stand against Alexander of Macedonia during around 327 B.C.E are well-known. He served as chief advisor for Chandragupta and his son Bindusara. His both celebrated works, Arthashastra and Neetishashtra retain an ecumenical, universal, and time transcending essence. These are not just relics from ancient history but treatises that continue to evoke discussions in contemporary politics of India.

According to a social theorist and political psychologist Asish Nandy, this text serve as an ideal manual for defence analysts, op-ed page pundits, and economists that often quote his aphorisms from both the treatises to show their acquaintance with Indian classics. The sutras in this book emphasise author’s strong advocacy for the theory, Buddhiryasya balam tasya which implies power resides where wisdom lies. It can also be described as controlled pathology in one’s conduct of routine life. The book is divided into six sections namely The Individual, Society, Good Company, General Observations, Miscellaneous and Sutras of Chanakya. All these chapters contain English renditions of Sanskrit sutras making them clear and lucid.

As I began reading this book, I came across the first chapter which was The Individual. The author commences this chapter by series of sutras venerating lord Vishnu and Rama. Out of various beautiful couplets, the one that caught my attention was, “Anger is death, lust is the river of hell (Vaitarani), knowledge is the cow of plenty and satisfaction is the divine orchard (Nandanvan).” In this chapter, he illustrates the qualities of a good individual. He states that the one who adheres to Dharma attains longevity even after dying and the consequence of an action finds its doer unerringly. Further, through aphoristic brevity, linguistic erudition, and structural conciseness, he recites the significance of fate and tells that external circumstances should not held responsible for individual deficiencies.

In the second chapter Society of his book, Chanakya explains interrelatedness of relationships in human life. According to him, an individual takes birth not only with his identity but also with pre-destined roles in this world. For instance, a girl is a not complete identity on her own and her individuality is concomitant to being a daughter, a sister, a wife, or a child’s mother. The notable aphorism for a mother was, “No gift is better than the gift of cereal and water, no date is better than the Dwadashi (the twelfth day of the lunar calendar); no mantra is greater than the Gayatri-Mantra and no god is greater than mother.” In addition to this, the author defines a father as a producer, a protector, and an educator in a family. All these intricacies of earthly relationships leave me speechless.

The third chapter Good Company contain author’s maxims for an ideal company. He states that a man should avoid an immoral wife, wicked friend, a witty servant and a house with a snake as these may become the reason of untimely death for anyone. He elaborates it as, “One must shun the company of the wicked and seek association of the noble; one must keep on doing good deeds without forgetting lord almighty even for a moment.”He further articulates that one may become despondent by teaching a blockhead student, by nurturing an evil wife, and by guiding a pessimist; no matter how enlightened the individual is.

Towards the end of the book, we come across a series of free- flowing sutras in succession that contain miscellaneous wisdom. These sutras are all precepts to improve one’s efficiency in routine activities, to run a home, and to run a country. The chapters also contain the significance of basic education, values, and ethics in an individual. Few guidelines to resolve common social issues are also mentioned in these chapters.  Even the back of the book emphasizes the importance of education as, “An educated man-a scholar gets accolades from all and earns reputation in the society. Since education helps one get everything one desires, it is respected everywhere.”

For nationalists fighting against colonial dominion, Chanaykya’s literature became an epitome of historical antiquity, astute statecraft and diplomacy, intellectual heritage, and cultural pride.  Nehru in his autobiography Discovery of India, admires the role of this great kingmaker of Maurya dynasty as someone who is inconceivably ‘bold and scheming, ‘proud and revengeful’, ‘simple and austere’, ‘unscrupulous and rigid’, and yet ‘wise and conciliatory’. Even after seven decades of independence, a genuine effort of scholarly discourse is required to unravel allegorical aura that surrounds Chanakya and his literature.