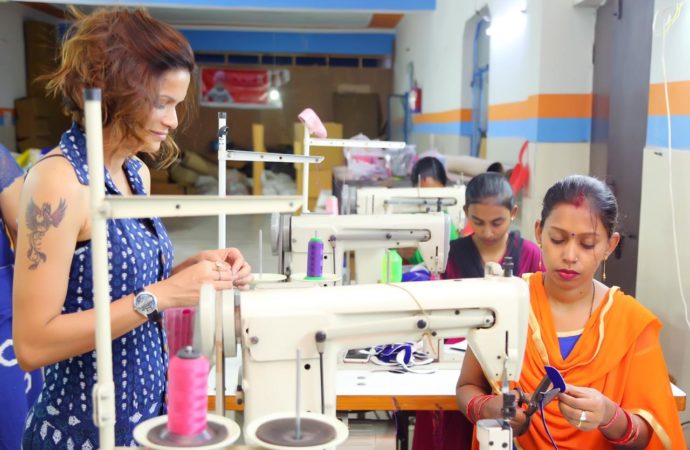 When Pooja surveyed the market during the advent of her journey, she found that Indian shoe market was lagging behind in kids’ section and products from China dominated the segment.

Early during the dawn of this summer, I took a rickshaw from the Dwarka Metro Station and headed towards village Kakrola approximately 2.5 km away from Dwarka Mor in New Delhi.  The rickshaw driver seemed familiar with my destination and hence the possible routes. The dusty roads were deserted but road to the shoe-manufacturing unit of Praefinio Footwears appeared promising. As I entered the premises of the factory, the frail and fervid entrepreneur Pooja welcomed me warmly. Within the production area, I saw a neat assembly line of sewing machines with various hues of shoe material strewn around them. An all-women workforce barring few male workers were assiduously working on those machines. For them, it was not merely their vocation but a livelihood as most of them were breadwinners for their families.

Pooja Thakur, Founder CEO, Praefinio Footwear in 2015, was a busy army wife attending the hectic schedules of her husband’s life while Ankur Jain, Co-founder was an amatuer chartered accountant. Pooja loved shoes generally and Ankur pondered at the financial feasibility of a prospective product. The very idea of manufacturing and designing shoes intrigued Pooja’s mind. So, when she surveyed the market during the advent of her journey, she found that Indian shoe market was lagging behind in kids’ section and products from China dominated the segment. This is how the idea of sole less booties for infants originated. Her toil also included the distance that she had to cover frequently between her husband stations to her prospective factory.

Ankur’s journey was also not a bed of roses as he was a fresh entrant in the market as a chartered accountant and a brilliant career as a financial advisor lay ahead of him. He confesses, “In 2015, we three people with different backgrounds came in touch. Being a chartered accountant, I looked at the financial viability of the product. A sole less bootie was completely new concept in market and hence was commercially viable. Garment tailors were abundant in market but tailors that could stich booties were unavailable. Pooja sketched the designs skillfully but to create it physically was a daunting task. Initially, we purchased wrong material to create a bootie. Sometimes the cloth could not hold stitching, while at other times finishing was not proper. Hence, it took one and half to two years to bring the finished product.”

Reminiscing her travails, Pooja tells me about the time when she had just two tailors with her. One of them was not that educated but knew his work very well. He currently is the supervisor of their manufacturing unit. She confesses that she felt distraught on various occasions when she peregrinated lonely on dark winter nights to collect sampling material for shoes from unsafe ghetto areas, while her home in a distant cantonment yearned for her lifelessly. Her husband’s unfailing support proved vital to her during those times. She along with Ankur then got in touch with people in market that owned and had license for various cartoon characters such as Tom and Jerry and proposed to manufacture our booties for them. Gradually, they got their brand trademarked as Bootie Pie.

She then adds, “My debut lot of shoes came on amazon.in which is a renowned retail portal in Indian space. I am overwhelmed by the trust that amazon.in put in us when we were just beginners. The word about durability, quality, and affordability spread through Facebook and then there was no looking back. We got several orders from other renowned portals such firstcry.com, hopscotch.in, babyfirst.com etc.” Buoyed by the success, Praefinio Footwears now plans to launch a new brand of footwear called Pabla for kids and scale up their operations. The unit now produces approximately 6,000 pairs in a month and employs 15 women shoe-makers. In fact, the women of the manufacturing unit operate independently and train each other. All the past vignettes now bring a smile to her face.

The primary challenge for small shoe manufacturers is rising capital costs, which is difficult for small shoe manufacturers on the account of high interest rates for commercial loans which range from 9-14%. Another major roadblock for them is increasing competition from e-commerce drives by global and national brands which have siphoned up a major share of traditional footwear. On this, Ankur says, “We have therefore scaled up our operations and are manufacturing shoes for children from five to ten years. Along with this, we plan to boost our sales in various segments at online retail stores, hyper markets, and specific specialty retail stores. Earlier, we concentrated on reducing the cost of production. Our aim to sell around 2,00,000 pairs by March 2020.”

According to the IBEF, women form the 30 percent of total workforce in footwear manufacturing industry of India and contribute actively in the national income as well as in exports. But, working conditions still remain hostile for them at their shoe manufacturing units. Most of the women workers are not documented as ‘employees’ on the official records of any company. Hence, they are not entitled for any legal compensations or benefits.  Kailash Devi, a shoemaker says, “I live in a village nearby called Nagli Devi and my family consists of five members. My family is dependent on me and I work since three and half years here. At Praefinio, we get our salaries on time along with the overtime allowance for the extra work we do. I prepare the shoe upper by stitching and feel proud that I am supporting my family through it.”

There is no respite for male workers of this industry too. While factories employ laborers at higher salaries to assemble the shoes, manufacturers find it economical to outsource the labour intensive process of stitching uppers to unorganized workforce using middlemen. Sunil Chauhan, who hails from Bihar and has been with Praefinio since the onset of their journey adds, “I am forty-two years old and have worked in unorganized sector for long. Here, I prepare patterns, samples, and supervise other workers during the time of production.  While working for others, our salaries were delayed sometimes for even two months. Work was often contractual and salary was paid on the daily basis. Here, it is not the case.” Pooja with a churlish yet infectious smile concludes, “I draw my strength from my laborious and dedicated workforce. They work incessantly during tough phases of production without caring for profit. Hence, they should be equal beneficiaries of the economic benefits we reap.”