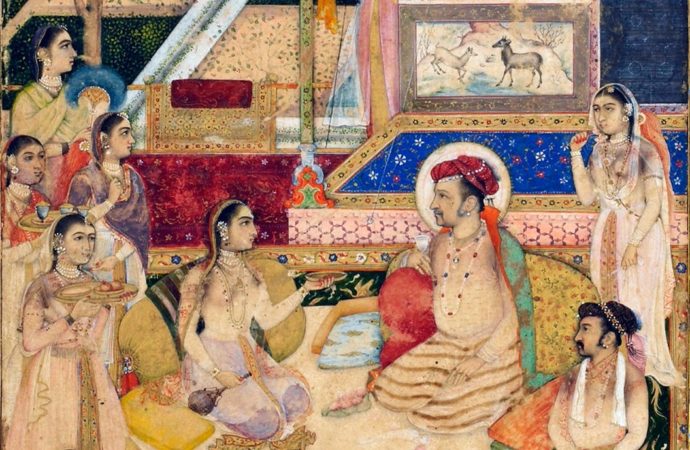 Ruby Lal discusses with Gunjan Joshi her new book, Nur Jahan’s being co-sovereign with Jahangir, and the erasure of her power by historians.

Q. Why romantic aspect of Nur Jahan’s self is better known in India as compared to her ruling capabilities?

There is a very long history of the erasure of Nur Jahan’s power that I detail in the book Empress. As she traveled through the length and breadth of the country with Jahangir issuing imperial orders, hunting a killer tiger near Mathura, and discussing the expansion of the empire, she rose to being the co-sovereign. This does not mean that during her time people did not raise eyebrows. In 1622, her stepson and Jahangir’s son Shah Jahan had risen in revolt against her. The catalyst for this revolt was the moment when Nur Jahan arranged a match for her daughter, Ladli from her first marriage. She chose the youngest prince, Shahriyar for her. During that time, Shah Jahan went into rebellion against Jahangir. It was apparent that he felt threatened because he knew about the power of Nur Jahan.

In fact, Shah Jahan and Nur Jahan had been closely aligned. The year 1622 is when chroniclers begin to write about the chaos that Nur Jahan Begum had raked up between the father and son.So, the early criticism appears to begin around this time. The other major moment of assessment of Nur’s power was when they were on their way to Kashmir and Mahabat Khan (who went on to capture Jahangir later in 1626) was along with them on the journey to a certain distance.  According to one of the chroniclers, he told Jahangir that a man who was governed by a woman is likely to suffer from unforeseen results. In 1626, she went on to save Jahangir sitting upon an elephant on a roaring river, commanding all men including her brother Asaf Khan. She strategized the entire combat and saved the emperor eventually.

Q. What was remarkable about her unlikely rise to power?

We come across a word called Fitna in the historical records for her. The word also used against Ayesha, Prophet Muhammad’s favorite wife when she went on a battle against Ali who was eventually the leader of the Shias. Over time, the word came to be used against women’s visibility, identity, sexuality etc. Following 1626, the word was used repeatedly against Nur which implied that her power produced chaos. Later, we find that a chronicler lists her power as a problem in the Shahjahanama. The epic criticizes the male legacy of power during Mughal rule and completely undoes her co-sovereignty with Jahangir. Then, there were other visitors that came to India like Thomas Roe, the ambassador of James I of England who followed Nur and Jahangir through the camps in Gujarat and Malwa. He calls her the goddess of heathen impiety.

In the 19th century, orientalist renditions of the romance between Nur and Jahangir became prominent in the histories of the time. It is her co-sovereignty that I launch and emphasize in the book. Her life history shows her dynamism and boldness while ruling along with the king. As I detail, the plural landscape of Hindustan was equally vital. It fostered experimentation and multi-cultural way of living along with war and other challenges of co-existence of multi-confessional identities. We should also remember that her Persian background deeply invested in poetry, arts, and calligraphy was significant in carving her individuality. Then, her own initiatives also played part. There were other women in the harem and indeed Nur conflicted for power among these women but no one became a co-sovereign. This speaks a volume about her capability as a bold strategist, her endeavors and her being ambitious in the statecraft.

It is important because Nur Jahan is the history of India. She was a Shia married to a Sunni Muslim who was also a half hindu rajput. Further, Nur Jahan is the only woman ruler among the great Mughals of India (there are technical signs and informal signs of her being a leader both of which I feature in the book). This is the actual history of India. As far as Islam is concerned, people should know that there were incredible and powerful women in Islamic history. There was Ayesha, Raziya, and then Nur Jahan Begum. It was also a multicultural world where identities were interwoven into one another. In the modern world, we tend to think in terms of fixed identities. People in those times were much more open. Jahangir was engaging with Siddichandra, a Jain monk. Nur Jahan used to tease him about the pleasures of the flesh.  It tells you about an open engagement. It tells us that Islam was experimental, mixed, and vibrant. The faith was also deeply attached to India.

Q. Despite being a close aid of the emperor, why Nur Jahan’s achievements never got recorded in writing?

Empress is the first book to propose the term co-sovereign for her and in which I detail the rich and wide-ranging aspects of Nur Jahan’s sovereignty. Scholars during some time have acknowledged her power but almost in bullet points and never in any concrete way thought through her power journey. There is a prominent tendency among scholarly and other writings to confine Nur’s power in a romantic story with Jahangir so much to the extent that romance becomes the explanation for her rise. Historians still ask about the evidence of her power. It may be right but seem to prove that how much disbelief prevailed about it. The records are plenty and rich. It is just the way how you approach the courtly documents, paintings, poetry, coins, architecture and even legends present in all books and end notes.

We have to accept that we privilege the idea of a ‘memoir.’ But in fact, people have expressed themselves in various and rich ways. What has soaked our subconscious is that if someone writes something himself or herself, it is the most legitimate source of history. What about various other sources such as architecture, poetry, and her stupendous image in which she holds a gun showcased at the Rampur Raza library and acknowledged by art historians as a real Nur painted between 1612 to1617? Why are these not considered solid evidence in her reign? Also why not that fabulous masnavi, a poem form that Mulla Kami Shirazi wrote marveling at her bravery in 1626, in which she strategized and saved Jahangir after he was taken captive for 100 days is considered a legitimate historical source? Historians have called it a panegyric account. Which courtly history is not panegyric? Is Akbarnama not panegyric? I think the problems are different in their histories of production and it takes patient work to understand the technicality of each genre. The issue is raising eyebrows around women’s leadership. It is actually not about evidence, even if it is said in a different way. It is to do with an inherent disbelief in women’s power.

Q. Why was she not able to encourage female dominance in Mughal nobility after her?

There were powerful women all around, she didn’t have to encourage. It depends on how you define feminine power. We cannot impose today’s notions of female agency during some another time. The Mughal world before and after Nur was full of authoritative women and they expressed it differently from each other. I am now working on the biography of Gulbadan Begum who I brought to the attention of the scholarly world in my first book on Mughal gender relations and domestic world. Gulbadan was an extraordinary woman who left the harem of her nephew, Akbar the Great and headed a group of elderly matriarchs across the Arabian Sea and the Indian Ocean towards the Muslim holy lands. She chronicled the migratory lifestyle of her family in an extant prose document by a woman from the entire world of the classic Muslim empire.