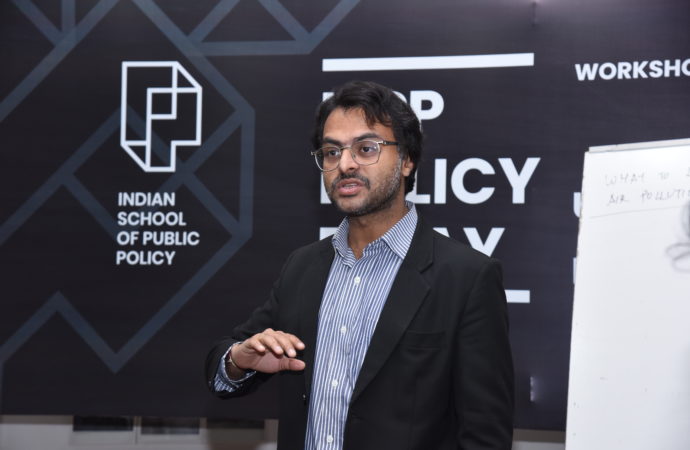 Q. Why do you think there is a need of good public policy institute in India?

There are number of reasons behind it. The most important reason is that we as a state are becoming a service facilitator. The government will now rely heavily on policy regulatory bodies and therefore increase in engagement of private sector with public services will lead to an increase in need of a public policy institute. The process of setting up new commissions has been intensified in last two decades. The other factor is that there is very little thought given to carving of public policies with adequate wisdom and futuristic vision in our country. Most of the policy making is done by economists, political scientists or social workers.

Now, public policy is emerging as a separate, philosophical engagement. There are few institutes that offer it as a discipline and they are very few in number. There is huge interest of government to engage with public policy professionals but such individuals are very less in number. I think policy-making should be extremely effective for a nation to move ahead. That is only possible if we train people to think like policy professionals and not like an economist or a political science scholar. A policy-maker has to think in an over-arching and inter-disciplinary manner. Hence, there is an urgent of a good public policy making institute in our country.

Q.  What is your opinion about basic income provisioning?

I think it is good idea but I think it cannot work alone as a policy. It is great that government is relying on this because sometimes it is necessary to empower people and let them make their own decisions. Having said that, I would also like to add that this policy would not work if not supplemented by various other subsidiary policies. First of all, we need to find that what are those subsidiary policies? Unless we provide an easy access to basic healthcare and education which is not driven for and by private interest, it becomes futile to give money to people.

So, one aspect of this is that money should reach in hands of people and not to the organizations. The other facet of this is no matter how much we believe in idea of empowering people; they often don’t end up in making good choices for themselves. In fact, there was a huge uproar in Bihar when state government was promoting liquor ban in the state. However, researches have shown that it has led to increase household income when women are able to make use of the money in other household expenses. This proves that government sometimes have to take decisions on the behalf of people because of their ignorance. Therefore, just giving money to people assuming that they will make good use of it will not help them.

I think there was a great intention behind government’s efforts to engage with policy making. At least, they were able to trigger a discourse around involvement of private sector in policy making by involvement of consultants or young people in NITI Aayog. They are now advising the government in creating policies. I think it was a great initiative but it hasn’t worked very well for variety of reasons. The first one being the implementation of policies still remains at the mercy of politicians and this is the problem in most of the countries. My opinion is that while the intention was good, it has not trickled down or manifested to the ground level. Think of the Draft National e-Commerce Policy, we definitely know that it is a good effort but we can’t call it the best one. There are number of shortcomings which many people have pointed out. But, the government after coming back to power again should tie the loose ends now which they may have not focused on earlier.

Q.  Do you think red-tapism deters entrepreneurs who wish to foray in the field of policy making?

Absolutely, I personally know many people who wanted to open school or a hospital but were not able to do so because of bureaucracy. In fact, Pratap C. Reddy who started the Apollo hospitals had written a letter to the erstwhile prime minister, Indira Gandhi. He famously stated in the letter that it was easier for him to open a liquor factory then opening a hospital. Thereafter, the prime minister changed the policies and took steps to attract private investment in healthcare. Even then, a large number of entrepreneurs get dissuaded either in beginning or in the middle during their journey particularly in the field of healthcare and education because of stringent bureaucratic norms. Often, it is the system that doesn’t allow officials to push a file. I think it is more of a systemic problem than the individual one. I also feel that bureaucrats are sympathetic for projects that are meant to benefit people at the bottom of social pyramid.

Q. What do you have to say about the ever-lowering minimum support price that farmers get for their produce and increasing farmer suicides?

I am not an agricultural economist to be able to comment on this but from my learning I can say that the problem is much more intricate. The problem cannot be resolved just by increasing minimum support price for the produce. It is because of the reason that due to the agricultural produce market committees (APMC) Act, farmers are bound to sell their produce only to the middlemen. In addition to this, they don’t own the resources they use. This is what Swaminathan Committee has pointed out in their five landmark reports between 2004 to 2006. I think there is no harm in increasing the MSP but it is just one of the problems that we need to resolve when we are looking at the plight of farmers in our country. I don’t think the records of any government have been particularly impressive in implementing the recommendations of Swaminathan Committee.

Q. Why do you think policy-makers should develop empathy for farmers and for other underprivileged sections of society?

Well, I think this should be the central intent behind policy-making. It should not be only for farmers and individuals from underprivileged section of society, but a policy-maker should have empathy for every individual in democracy. Most of my work has been for workers of informal market. I can imagine the magnitude of harshness on the people who are working for 24 hours in a day in dangerous situations outside any formal contract and without any economic insurance. I think empathy should be the most important facet of policy-making. Philosophers like Aristotle have argued for a long time that the primary purpose of politics should be to cultivate a virtuous society. Therefore, the head of policy making should cultivate good behavior and virtues among citizenry of any country.

Q. How does ISPP prepares good policymakers of tomorrow?

The first factor is that ISPP is a practice driven institution. The curriculum and faculty are all practice driven. So, while the students also work on real life projects with the particular industry or government while they are studying. There is very high level of practice-driven instructions which enables them to think about policy-making in practice. The second factor is that each member in our faculty is an expert in his or her domain. Most of our faculty members have advised government at various occasions. Some of the prominent names in our faculty are Dr. Amitabh Mattoo, Dr. Sanjaya Baru, Dr. Bappaditya Mukhopadhyay, Dr. Shubhashis Gangopadhyay etc. It leads to very powerful discourse within the classroom to develop minds of young policy-makers.