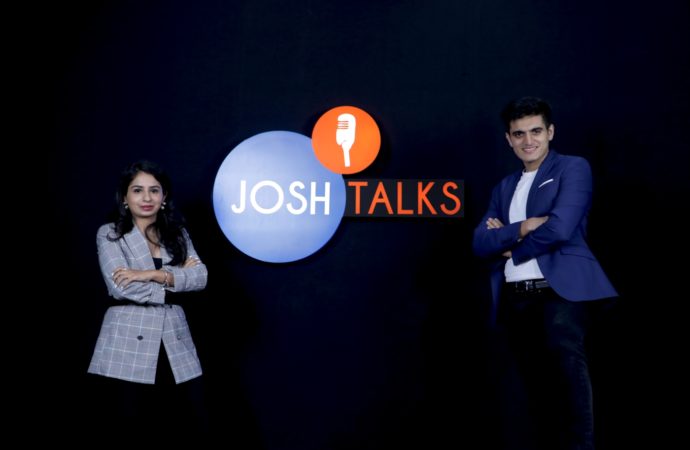 Josh talks is an impact media platform with a mission to unlock human potential. Supriya Paul, Co-founder, Josh Talks speaks to Gunjan Joshi about its recent association with NSDC and how impact stories can change lives.

Q. What was the idea behind the advent of Josh Talks?

We started Josh Talks about five years ago when I met my co-founder Shobit. It was his idea which I completely related to and wanted to execute as soon as possible. At that time, we shared a common frustration that the youth from smaller town had immense potential but there was no right sense of purpose in life for them. This is where the word Josh originated, which means zeal to do well in life. We both were still studying in college at that time and had no idea about how to materialise our plans. Our role models like Steve Jobs, Kiran Mazumdar Shaw, Michael Dell etc acted as a role model for us.

Here, we figured out that these public figures were not from a rural background and belonged to an upscale section of society. We then started looking for individuals who were from rural area or smaller cities and have done extremely well in their respective domains. People from smaller cities could look up to such role models. These were people like small kirana shop owners who are earning 1-2 lakhs per month and are taking care of their entire family. This was the sole purpose behind the advent of Josh Talks, showcasing such success stories on one platform in various Indian languages.

Q. How does the enterprise shapes dreams of youth from remote areas of India?

First step towards this is to showcase stories of inspiring individuals to such people which are one of them. By doing this, we let them decide that who is it that they wish to become like. He or she is an individual who looks like them, speaks like them, and yet has an extraordinary journey. The second step towards this is guidance on Josh Kosh, a career portal for the underprivileged. Hence, if someone wishes to become a bank PO, it has a detailed module about it with relevant official links. It also guides such youth about how to get a government job.

It also tells an aspirant about how to get a government job if you have just passed 10th or 12th. All such information is provided in Hindi and now we are introducing four other regional languages too. Some of the modules have already been translated to Bangla and Marathi, the rest of them are in English and Hindi currently. Third step is that we have recently launched our skilling initiative where we are running courses to improve soft skills for better employability. Such skills include English speaking, personality development, confidence building, and job application in a methodical way.

Q. How do you think impactful stories can change lives of people in distress?

We can take example from mainstream cinema for this. We all know that menstrual hygiene is a big problem in rural areas of India, but we were not aware of it until we all witnessed the successful journey of a Padman on silver screen. Movies always have this capability to strongly impact our perspectives about things. A story has a similar effect. We came across one such story during our impact study. One of our viewers was a tuberculosis survivor. He was in an advanced stage of the disease and was surrounded by gloom and depression because of intense medication. Due to this, he dropped out from his college. One of his friends suggested him to watch videos by Josh Talks to uplift his mood.

As he started watching our videos, he was inspired by a video by Kusum who was a cancer survivor. She had been fighting the disease for four years then. She spoke about how being a patient was a struggle everyday but still she had zeal to never give up. He could relate to the story so much that he decided to rejoin his college and he is doing extremely well in his studies now. Eventually, he decided to form a support group for other TB survivors. He is now counselling them to get out of the depression.

Q. What is your opinion about unorganised workforce in our country and how can we improve their living conditions?

The biggest problem for the unorganised workforce is accessibility to opportunities which no government body addresses. It is because of this constraint, we thought of opting regional languages for both online and offline communication. The second major problem is lack of necessary skills. There are almost 100 million youth that lie between the age bracket of 19-25 years who are available in job market but still are unemployable. The number will rise to approximately 250 million by next year. The issue has been addressed by bodies like Skill India but there is a need of more platforms to take this up.

Q. How does an association with NSDC will further the cause of skill enhancement for Josh Talks?

NSDC will leverage the platform of Josh Talks to inspire and educate its 1.5 million daily viewers about its skill development and vocational training programmes. What we have started right now with NSDC is a miniscule effort as compared to what we aspire to achieve together. For now, we are disseminating message among underprivileged youth that why it is important to upgrade our skills, how do job opportunities, and pay cheques improve through this. This was our first story which we released online. As a first step with NSDC, we will make our courses accessible to trainees who are undergoing training at their skill centres as well as opting for online courses. This is in order to polish their skills which will better their chances of getting employed.