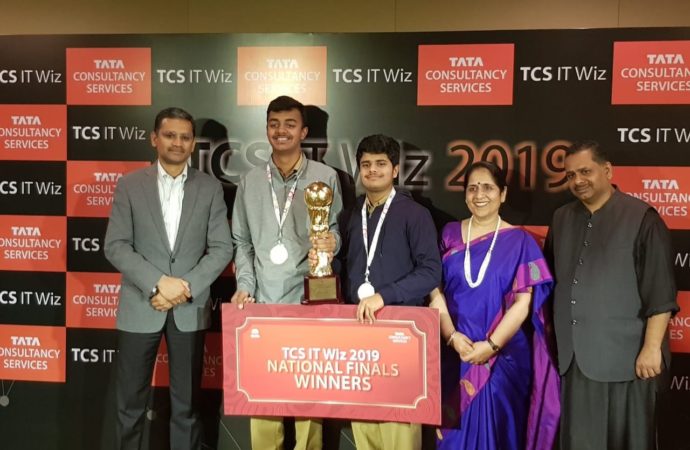 Tata Consultancy Services, announced the champions of national finals in the 20th edition of TCS IT Wiz 2019.

Tata Consultancy Services, a leading IT services, and business solutions organisation, announced the champions of national finals in the 20th edition of TCS IT Wiz 2019. The tech quiz is India’s longest annual inter-school technology quiz held annually in Mumbai.

Udbhav Saxena and Yashvardhan Saxena from Hyderabad Public School were adjudged as the champions of TCS IT Wiz. The vouchers worth Rs. 150,000 and a coveted champion’s trophy was won by the winning team, while the runners up team consisting of Arnav Shukla and Palash Mukherjee from Bhavan’s BP Vidyala Mandir, Nagpur took home a trophy and vouchers worth Rs. 100,000.

The winning team got vouchers worth Rs.150,000 and the coveted champion trophy for their school, while the runners-up Arnav Shukla and Palash Mukherjee from Bhavan’s BP Vidyala Mandir, Nagpur took home vouchers worth Rs. 100,000 along with a trophy for the school. The event was graced by Dr. Ritu Anand, Chief Leadership and Diversity Officer, TCS who handed over the prizes to the winner and runner-ups.

TCS IT Wiz today is the largest inter-school IT quiz among high school students in India. More than 11,000 students from class 8 to 12 from 850 schools of tier II and tier III cities participated in the 20th anniversary edition this year. The top six teams from regional editions held in 12 cities namely Bangalore, Ahmedabad, Chennai, Bhubaneswar, Delhi, Indore, Hyderabad, Kochi, Mumbai, Kolkata, Nagpur, and Pune made it to the National finals.

The national final consisted of five buzzer-based rounds in which one was focussed on TCS and gave each team an equal opportunity to respond. Giri `Pickbrain’ Balasubramaniam, with his characteristic eloquence moderated the quiz for the coveted national championship title. The competition was fierce among the top six extremely talented teams.