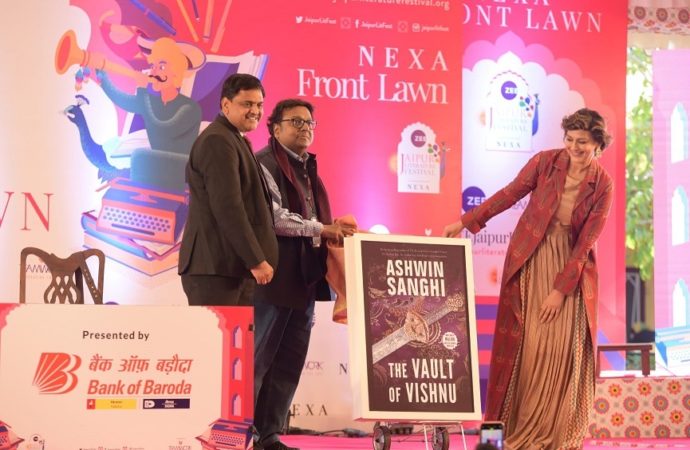 The ZEE Jaipur Literature Festival entered its 13th edition yesterday on a chilly Jaipur morning while keeping its trademark joie de vivre intact.  The front seats of NEXA front lawn at Diggi Palace were occupied by enthusiastic early risers. The venue appeared like a kaleidoscope of vibrant art and culture. While dhaaks and nagadas reverberated in the background, the life sized puppets paved the way of visitors to the NEXA Front Lawn. Dadi Pudumjee, the renowned puppeteer presented an excerpt from his famous production Images of Truth.

Nirali Kathik, a Mumbai-based classical vocalist enthralled the audience with Raga Gurjari Todi. Her performance comprised of two Bandishes namely Meri Ankhiyan Lage and Bhor Bhayee, which was succeeded by Mero Allah Meherbaan in Raga Bhairav. This performance gave way to the inaugural session which included inaugural address by honorable chief-minister, address by keynote speakers Shubha Mudgal, Marcus du Sautoy, and festival directors William Dalrymple and Namita Gokhale. At the inaugural, Ashok Gehlot said, “I was the Chief Minister when the festival began and so I have seen it from its first year. Namita Gokhale, Sanjoy K. Roy and William Dalrymple have done an exceptional job at curating the Jaipur Literature Festival which has put Jaipur on the world map.”

Welcoming the audience on the first day, William Dalrymple, Festival Co-director, Jaipur Literature Festival said, “Why has the literary festival taken off in this country in this extraordinary way? I have a pet theory that it goes back to the tradition of spoken literature for the celebration of literature orally through the spoken word has such deep roots in this country. From the time of the Vedas, before the invention of writing, poetry and religious texts were passed on from ‘Guru to Chela’, people learnt orally. But there is something which continues in the Indian tradition, particularly here in Rajasthan – like the verbally-conveyed epics of Pabuji and all other such which are born out of the soil of Rajasthan and also in the courts of India. So, the idea that a literary festival is a foreign import is something that can’t be maintained. We’ve tapped into something very deep here. Literature is alive and is loved in India.”

Co-Festival Director Namita Gokhale added, “We live in puzzling times. Polarities of the political distract us from urgent issues of the climate emergency. At a time when people live in echo palaces and ego castles, we examine and interrogate our changing world by listening to every shade of opinion. My co-director William Dalrymple and I have together curated a program that covers a very wide range of things at the festival”

In his keynote address, eminent author Marcus Du Sautoy said, “Adding my welcome to the 13th edition of the JLF, I like what Srinivasa Ramanujan used to say about numbers: that every number has its own particular character in the story of mathematics. For me it is thirteen; thirteen is a prime number, an indivisible number and the JLF is certainly a festival in its prime.” In her part of keynote address, acclaimed Hindustani singer Shubha Mudgal said, “Hierarchies should have no place in the arts. As long as art exists in all its richness and diversity, we can dream of a better tomorrow.”

The first day of the festival highlighted the urgent need to break the shackles of societal stereotype among women including finding identity in unconventional lifestyles. Talking about one of her unconventional character Adele, the Franco-Moroccan novelist told curator and art-writer Avni Doshi that some women just want to be objects.  “All my books are fairy-tales!’’ said Leila Slimani as she spoke about French title of her book, Dans le jardin de l’ogre(A Doll in an Ogre’s Garden).  “Adèle wants to be an object, a doll. A doll who wants men to tell her what to do,” says Slimani.

Ashwin Sanghi, one of the best-selling English fiction authors unveiled his new book, The Vault of Vishnu through Sonali Bendre Behl on the first day of famous literary carnival. The book was fifth edition in the author’s Bharat series. The fifth edition of ‘Mahakavi Kanhiyalal Sethia Award for Poetry’ has been awarded to Arvind Krishna Mehrotra, a well-known name to readers of contemporary literature. Honorable Deputy chief-minister Sachin Pilot presented award to Mehrotra on Sethia’s 100 birth centenary years.