A Trip to Mermaid Land 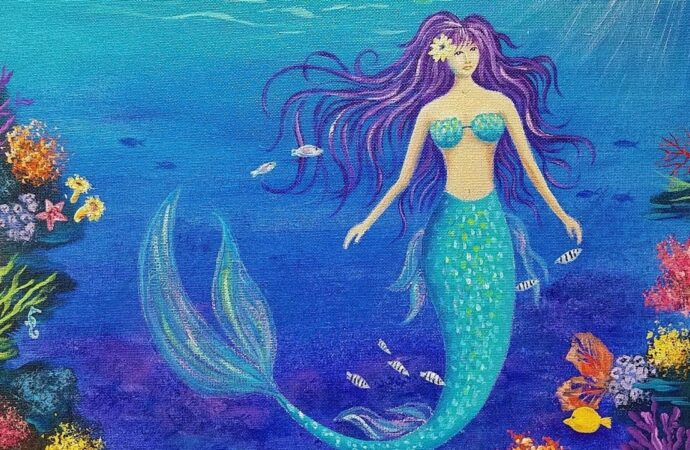 I must be a mermaid, Rango. I have no fear of depths and a great fear of shallow living.- Anais Nin

I don’t know whether it was a delusion or a day-dream,

But ephemeral memory of it does not fade away.

Alone I was sailing in that boat,

Middle of the sea surrounded with fog.

Enraptured I followed the sound of music.

Its dulcet sound filled my heart with love and hope,

And welcomed me with its familial tone!

I was then puzzled to see the door made of water.

Is that the gateway to another world?

A sense of déjà vu then engulfed me.

It comforted me rather than making me scared.

On entrance, a dolphin guard waited for me.

He asked me for a ride on his back.

And took me to deepest recesses of the sea,

Where amorphous creatures floated and hummed.

There I saw a mermaid princess with my face,

And she welcomed me warmly with her lithe grace.

Who are you and why are you crying?

To which she answered I am you from other world.

Here a king of snakes is asking for my hand,

And not because he ardently loves me,

It is only because of his ill-will to rule my kingdom.

After this marriage, I will have to open all gates of my treasury,

And the one who can forbid him now is only you.

I wondered how I would accomplish this mammoth task,

Without knowing any sorcery or magical power!

Your pure heart and intent will be our sword,

She told with an assuring smile.

The grotesque snake king then held me by my hand,

While he was hallucinated I removed his fang.

The subject of mermaid princess then threw a ball,

With a sumptuous banquet that was luscious and easy.

In morning I thought it was a delusion but my tongue,